Now that I’m out of the sim, I’ve moved onto flying the Cessna 172 to put what we were learnt in the sim into practice before moving on the Twinstar.

The first couple of lessons have been about using the VOR beacons to track, enter and maintain the holding pattern and make approaches.
In my last lesson, these all came together as myself and Fraser, another cadet on my course, flew over to Rotorua for the day. We flew there using the beacons at Hamilton and Rotorua to guide us and then using the Rotorua beacon to do holds and approaches at the airport there.
Having Fraser in the back on the way out meant we were able to film my last approach

My approach to land at Rotorua

Another benefit of IFR flying is that we can fly at any time of the day and in pretty much any weather conditions. This allows for some great photos! Head over to the photos page to see some of the better photos from the past couple of flights.
Here are a couple of my favourite photos from these flights:

Above: Flying over Hamilton city at night
Below: On profile to land at Hamilton 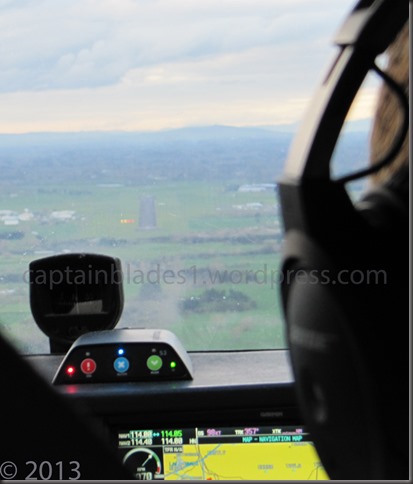 The next lessons see me moving onto GPS Holds and Approaches and then moving onto flying longer distance routes under IFR conditions, so an exciting couple of weeks ahead!

Another manic 10 days has just passed and once again I have been flying almost every day. But it’s been worth it as I’ve now passed PT1, our first flight test out here in New Zealand!

Having completed this flight and done all the night flights that I’m going to do, I’ve now finished the single engine VFR phase of the course. With that comes the fact that I’m probably not going to fly the Katana again or fly solo.
My flights from now on will all be dual flights and I’ll be using the simulator, the Cessna 172s and the Diamond DA42 Twinstars. Therefore, I can wave goodbye to the Katanas. I will miss them slightly as they were great fun to fly, but one thing I won’t miss is their starting abilities. Hopefully, whilst flying the next set of aircraft I won’t have to cancel so many flights due to not being able to start the plane.

I now have a couple of days off before starting on the IFR groundschool, which consists of 2 days being taught how to fly instrument approaches and getting used to the different ways of doing things compared to visual flying.

In the past week, the flights have been coming thick and fast. I’ve done over ten hours this week and I’m glad that I’ve been able to make the most of the decent weather – although admittedly it has been a bit of a challenge with the wind! One thing I can say from this though is that my crosswind technique has improved!

One of the flights that I’ve done this week is my Qualifying Cross Country flight. In this flight you have to fly over 300 nautical miles (nm) and land at two airports away from where you started.

I planned on going from Hamilton to New Plymouth, around the back of Mt Egmont (Taranaki) to Wanganui, up past Jerusalem to Taumarunui, turning to head to Tokoroa, onwards to Tauranga and then back to Hamilton. A route that is 400nm long and takes in some great sights in the North Island.
But like all plans, that didn’t happen! Instead, after taking off from New Plymouth after my stop there I had to divert from half way around Mt Egmont due to weather and go straight to Taumarunui. This cut off a large chunk of my route. Fortunately it was still over 300nm but I did miss out on seeing some of the sights around the back of Taranaki. 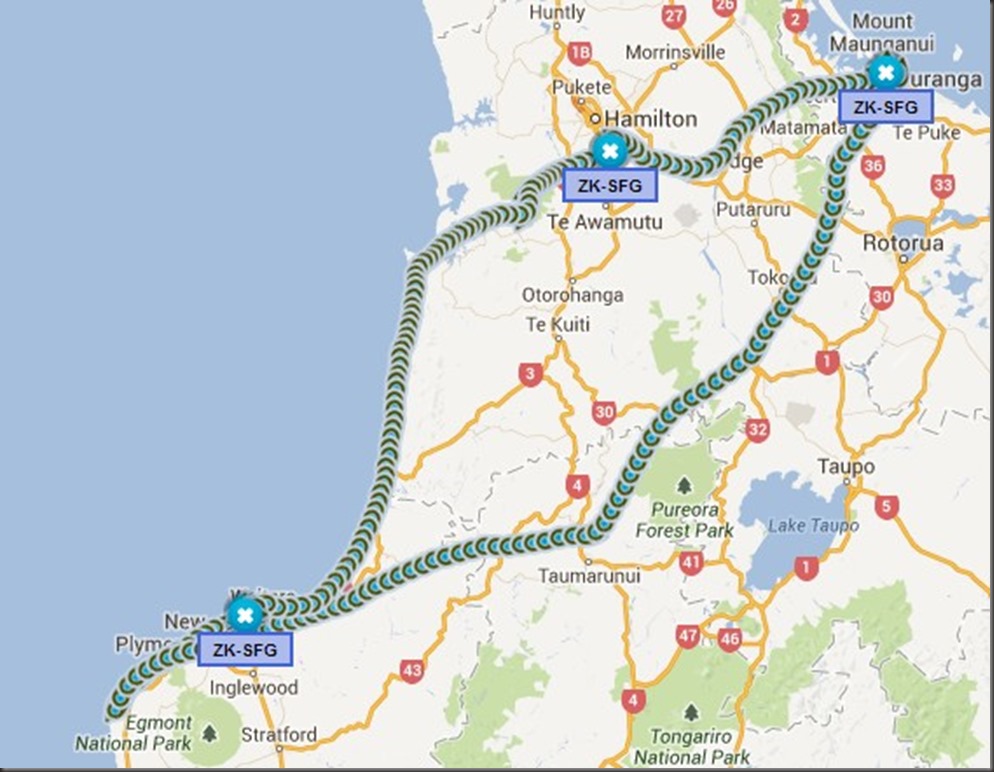 This was my final route with the landings shown by the blue crosses.
Overall, it was a very stessful yet exciting day as it’s not often that you get to fly so far in a day at this stage. It was also good that the four of us doing the same lesson that day all met up in both New Plymouth and Tauranga despite having flown different routes.

I also got some great pictures –

Above: Me by my plane in New Plymouth

Above and below: Three Katanas parked up at Tauranga 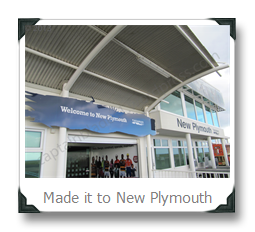 Having done all the flights that I have this week, I am now nearing the first flight test. My next flight is the profile flight for it – seeing if I’m good enough to pass it and to point out what I  need to improve.
It’s odd to think that I only have four more flights left on the Katana and therefore only four more single engine VFR flights. Soon it’ll be onto proper instrument flying and then onto the Twinstar!

After seemingly always having my feet on the ground last month, this month has seen me constantly booked in to fly – and I’m not complaining!
It’s allowed me to make the most of the relatively nice weather and I’ve used to to see a lot more of New Zealand.

Since my last update, I’ve been further away from Hamilton than before. The other day, I decided to go north of Auckland and take in the views from up there.
The conditions were fantastic and the views – stunning!

To get such good views required me to get up to a high altitude and that meant talking to Auckland Control.
Now, this may not sound like much, but it meant I was talking alongside commercial traffic, including 737s, 777s, A320s and potentially also A380s!
It definitely gave my flight a very commercial feel to it as I was frequently having to talk to the controller asking for height and heading changes to stick to my planned route.

My next few flights are also navigation flights but my first flight test is just around the corner and, once that is completed, I’ll soon be moving onto the IFR and Multi Engine flying

Whilst I am employed by Flybe, all views and opinions expressed within this blog are all my own and do not represent the views and/or opinions of my employer